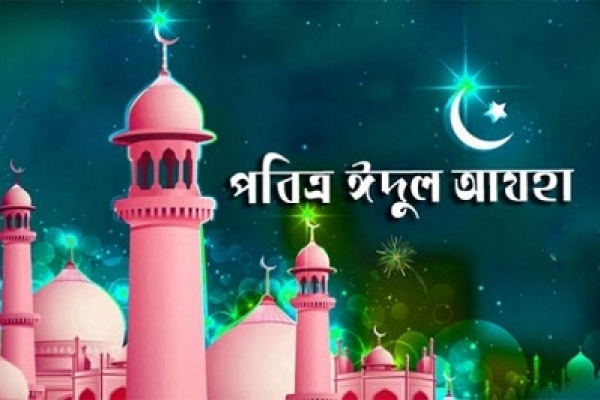 The holy Eid-ul-Azha, the second biggest religious festival of the Muslims, is being celebrated across the country today with due solemnity and religious fervour.

The Eid-ul-Azha is celebrated on the 10th of Zilhajj month of the Hizri calendar as Hazrat Ibrahim (AS), on this day, some 4,500 years ago, offered to sacrifice his beloved son Hazrat Ismail (AS) who willingly submitted to the will of his father to please Allah. But the Almighty in His benign mercy spared Hazrat Ismail (AS) and instead sent a ram to be sacrificed.

President Hamid will exchange Eid greetings with the cross sections of people, including eminent citizens and diplomats at his official Bangabhaban residence on the day at 10:30 am, Bangabhaban sources said.

Prime Minister Sheikh Hasina will also exchange greetings with the cross sections of people, including party leaders and workers, judges and foreign diplomats, at her official Ganabhaban residence on the day from 10am to 11am.

The main Eid congregation will be held at the National Eidgah near the High Court Bhaban here at 8am, said Islamic Foundation.

President M Abdul Hamid will perform his Eid prayers at the National Eidgah.

A total of five Eid congregations will be held at the Baitul Mukarram National Mosque, the first jamaat at 7 am, second at 8 am, third at 9 am, fourth at 10 am and the last one at 10:45 am respectively.

One Eid congregation will be held at the south plaza of the Sangsad Bhaban at 7.30am.

Two Eid congregations will be held at the Dhaka University central mosque Mosjidul Jamiah — the first one at 8am and the second one at 9am. Eid Jamaat will be held on Salimullah Muslim Hall field, Dr Muhammad Shahidullah Hall lawn, Uttar Nilkhet premises and Baitus Salam Jam-e-mosque of Giasuddin Ahmed Residential Area.

Railway stations, bus and launch terminals were seen overcrowded for the last few days as home-goers are heading for their desired destinations.

State-run Bangladesh Television, BTV and Bangladesh Betar and other TV channels and radio stations would broadcast special programmes on the occasion of the Eid-ul-Azha.

On the day, improved diets will be served to inmates of government hospitals, prisons, orphanages, safe homes and shelter centers.

The government earlier declared three-day public holiday on the occasion.