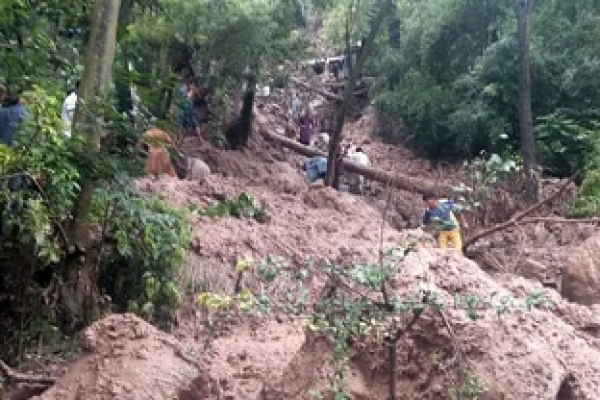 At least seven people, most of them children, were killed and six others were injured after a landslide triggered by heavy rains engulfed three houses in a mountain village of Azad Jammu and Kashmir (AJK) early Saturday, officials said.

The incident occurred at about 5am in a hamlet known as Pothi Chapriyan Hiloti, close to which runs a channel to carry water for an under-construction hydropower project, said Raja Pervez Hameed, Station House Officer of Hajira – a subdivision of Poonch district.

As the houses were struck, people of the area rushed to rescue the trapped residents.

However, Zubaida was critically injured while her children received minor wounds and bruises, the SHO added. The woman was referred to a health facility in district headquarters Rawalakot.

From the house of Raj Muhammad, the bodies of his wife Sobia, 40, and daughters Tasmiya, 11, Alisha, 9, Asma, 7, and Mahjabeen, 4, were recovered, Hameed said.

The body of 18-year-old Shoaib Maqsood, a nephew of Raj, was also recovered.

Rescuers recovered the body of Rufi, a one-and-a-half years old daughter of Raj, from under the debris in the afternoon.

Because the area was inaccessible by road, no heavy machinery could be brought there to remove earth.

“We are doing it manually with shovels,” the SHO said.

According to him, Poonch Deputy Commissioner Mirza Arshad Mahmood, SSP Chaudhry Zulqarnain Sarfraz and a local army commander were present at the scene to supervise the rescue operation.

An AJK official told Dawn that in the current year at least 43 people have died and at least 20 others wounded in rain-related incidents in Muzaffarabad, Neelum, Jhelum Valley, Poonch and Haveli districts.