Govt to do everything for development of medical science: PM

Govt to do everything for development of medical science: PM 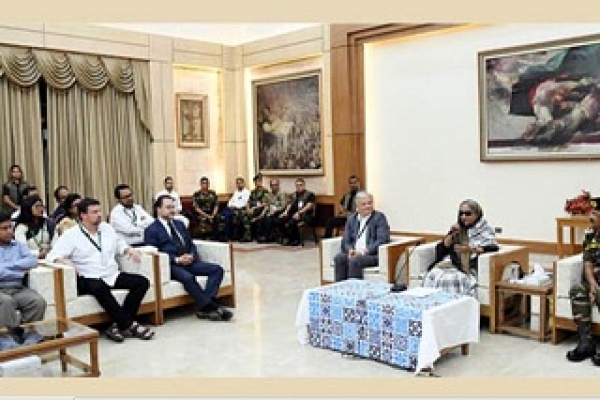 will do whatever is necessary for the development of the field.

“We want to do everything necessary for the development of medical science as well as education and higher education including sending teachers and other concerned abroad,” she said.

Sheikh Hasina added: “We’ll have to pursue all sorts of education so we can do more critical works like succesful operation of conjoined twins – Rabeya and Rukaya – in our country.”

The prime minister said this when the medical team comprising Bangladeshi and Hungarian doctors and other staff who carried out the operation of the conjoined twins at the CMH in Dhaka recently called on her at her official Ganabhaban residence here last night.

Sheikh Hasina said the Bangladeshi physicians gathered a huge experience through the surgery of conjoined twins titled “Operation Freedom”. “Now we’ll have to focus on further development of medical science by retaining this success,” she said.

Besides, Rabeya and Rukaya’s father Rafikul Islam also spoke at function expressing his feelings about the successful surgery of her twin daughters.

Sheikh Hasina congratulated the physicians, nurses and other staff including the members of the Hungarian medical team for conducting the operation successfully.

“It’s a wonderful job of the Bangladeshi and Hungarian doctors,” she said, hoping that the twin kids will return to their mother’s lap with full recovery soon.

Through the successful surgery, she said, the physicians of the government institutions of Bangladesh gathered a new experience.

The prime minister said the successful surgery of Rabeya and Rukaya has opened the eyes and ears of Bangladeshi doctors.

“A beautiful relation has been created among different hospitals and medical institutions centering the critical operation,” she said.

Praising the coordinated work of the physicians of those hospitals and institutions, the prime minister said these institutions worked together and developed understanding and exchanged experiences through it.

“You’ve separated the conjoined head of Rabeya and Rukaya through a successful surgery. But they’ve engaged you in a coordinated work and it’s a great achievement for all,” she said.

The prime minister said the medical institutions which were involved in the surgery of the conjoined twins will have to be more developed and modernized in the light of their experience.

The Hungarian medical team members highly appreciated the wonderful cooperation with the Bangladeshi doctors centering the surgery. It’s like a unification of two countries, they said.

They also praised the unique hospitality of the Bangladesh government in this regard. The successful surgery of the conjoined twins has created a new type of friendship between Bangladesh and Hungary, they remarked.

Speaking on the occasion, Rabeya-Rukaya’s father Rafikul Islam expressed gratitude to the prime minister for taking responsibility for treatment of his daughters.

He also thanked the Bangladeshi and Hungarian doctors who performed the surgery of his daughters.

The conjoined twins were separated after a successful 33-hour operation at the Combined Military Hospital (CMH) on August 2.

The operation was carried out with the support of Prime Minister Sheikh Hasina and Defenceless People Foundation (ADPF), an agency of the Hungarian government.

Earlier, the twins were sent to Hungary for treatment and Prime Minister Sheikh Hasina bore their entire treatment cost at home and abroad.

The three and half years old twins, who were born with joint heads, suffered from a rare embryological disorder affecting an estimated one in every five to six million births. They hail from Chatmohor upazila in Pabna.