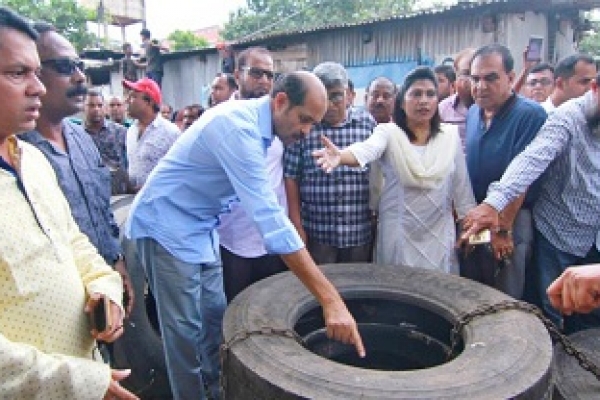 Mayor of Dhaka North City Corporation (DNCC) Md Atiqul Islam on Monday announced that a combing operation will be launched on Tuesday to eliminate Aedes mosquitoes.

The mayor said this while talking to reporters after inspecting mosquito-elimination drive at Mohakhali bus terminal in the capital.

“Today, we visited the bus terminal’s surrounding areas and found some abandoned tires. Aedes mosquitoes usually lay eggs in stagnant water. So, I asked the magistrate to fine the terminal authorities Tk 5 lakh,” he said.

“City corporation staff will visit houses in each area during the combing operation. Actions will be taken if Aedes larvae are found. We’ll also conduct drives at all bus terminals, hospitals and police outpost areas,” he also said.

Atiqul said the staff will mark the sites where Aedes larvae will be detected, the first-time offenders will be given warning. Later, actions will be taken against them after 15 days if larvae are found there again.

Replying to a question over the effectiveness of pesticides, DNCC entomologist Kabirul Bashar said  new pesticides have been brought in the last week and these are 97-98 percent effective.