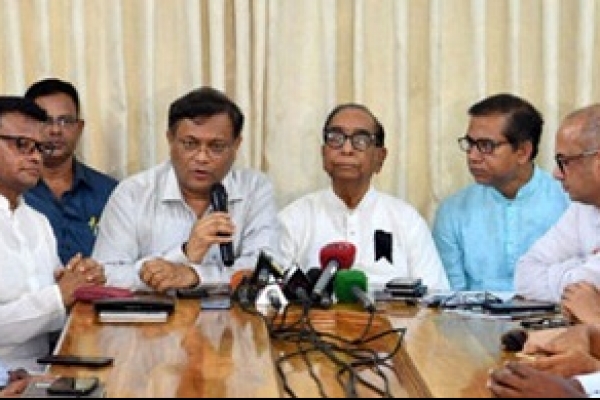 Information Minister and Awami League Publicity and Publication Secretary Dr Hasan Mahmud today said bad smell of BNP’s politics will be transcended beyond the border if they take the Begum Khaleda’s release issue to global forum.

“Begum Zia was convicted by country’s highest court in graft cases . . . the countrymen know everything as she embezzled the money of orphans. Now international community will learn about the matter if they go international forum,” he said at a press briefing at Prime Minister’s political office in Dhanmondi.

Dr Hasan said the trial court gave five-year imprisonment to Begum Zia in the graft case. After getting the verdict BNP went to the higher court where the court enhanced the punishment to 10 years, he noted.

About an allegation of BNP on the issue of rawhide of sacrificial animals, the AL leader said it was Prime Minister Sheikh Hasina who has taken pragmatic steps for flourishing country’s leather sector.

But, due to restriction of compliance executed by the government for environmental protection, the number of tanneries didn’t increased. Some unscrupulous profit mongers took the benefit of the excess rawhide, he added.

He said the government is investigating the matter to find out anybody guilty for the trick.

Replying to a question, PM’s advisor HT Imam said the anti-liberation forces are still active at home and abroad and hatching conspiracy against the present government. They are responsible for spreading rumours in different times, he said.

Urging all to remain alert from the conspirators, Imam said the people of the country know it very well what they want. The government will take action against those people.

Later, a meeting of AL sub-committee on publicity and publication was held with committee chairman and prime minister’s political advisor HT Imam in the chair.-BSS