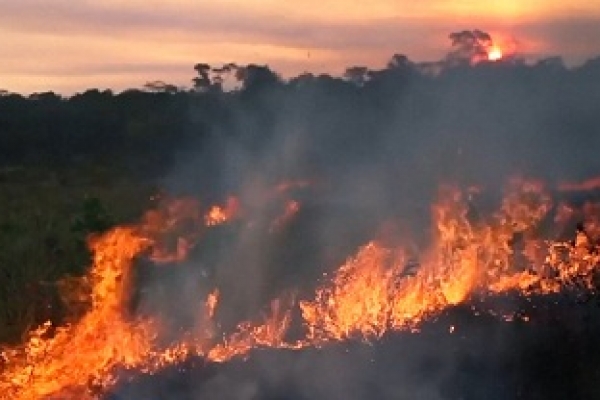 The Amazon is burning - and humans are likely to blame. Environmental organizations and researchers say the wildfires blazing in the Brazilian rainforest were set by cattle ranchers and loggers who want to clear and utilize the land, emboldened by the country's pro-business president.

"The vast majority of these fires are human-lit," said Christian Poirier, the program director of non-profit organization Amazon Watch. He added that even during dry seasons, the Amazon - a humid rainforest - doesn't catch on fire easily, unlike the dry bushland in California or Australia.

Farmers and ranchers have long used fire to clear land, said Poirier, and are likely behind the unusually large number fires burning in the Amazon today.

The country's space research center (INPE) said this week that the number of fires in Brazil are 80% higher than last year. More than half are in the Amazon region, spelling disaster for the local environment and ecology.

And 99% percent of the fires result from human actions "either on purpose or by accident," Alberto Setzer, a senior scientist at INPE, said. The burning can range from a small-scale agricultural practice, to new deforestation for a mechanized and modern agribusiness project, Setzer told CNN by email.

The Amazon forest produces about 20% of the world's oxygen, and is often called "the planet's lungs." According to the World Wildlife Fund, if it is irrevocably damaged, it could start emitting carbon instead - the major driver of climate change.

The environmental minister, Ricardo Salles, tweeted on Wednesday that the fires were caused by dry weather, wind, and heat. But CNN meteorologist Haley Brink said the fires are "definitely human-induced," and can't be attributed to natural causes like lightning strikes.

This year's fires fit into an established seasonal agricultural pattern, Brink said. "It's the best time to burn because the vegetation is dry. [Farmers] wait for the dry season and they start burning and clearing the areas so that their cattle can graze. And that's what we're suspecting is going on down there."

The peak of the dry season is still to come in September, she added.

Compared to previous years, the destruction this year is "unprecedented," Poirier said.

"Because the use of fire is a traditional part of tropical agriculture to clean agricultural land, grazing land, it is very difficult to stop it," Alves said in an email.

Organizations, activists, and social media users worldwide have reacted to the news with alarm. #PrayForTheAmazon and other variations of the hashtag are trending globally on Twitter, with hundreds of thousands of tweets. As images and news of the fire spread, many are demanding accountability from Brazilian President Jair Bolsonaro.

When Bolsonaro was running for president, he made campaign promises to restore the economy by exploring the Amazon's economic potential. Now, environmental organizations say he has encouraged ranchers, farmers, and loggers to exploit and burn the rainforest like never before with a sense of impunity.

Fires are "just the most visible symptom" of Bolsonaro's policies, and "reflect the irresponsibility of the president," said Observatorio do Clima (Climate Observatory) in a statement on Wednesday.

The pro-business Bolsonaro has hamstrung Brazil's environmental enforcement agency with budget cuts amounting to $23 million - official data sent to CNN by Observatorio do Clima shows the enforcement agency's operations have gone down since Bolsonaro was sworn in.

And just weeks ago, the director of INPE was fired after a spat with the president. The director had defended satellite data that showed deforestation was 88% higher in June than a year earlier, which Bolsonaro characterized as "lies."

Bolsonaro, who has previously said he is not "Captain Chainsaw" in reference to Amazon deforestation, has dismissed accusations of responsibility for the fires. On Wednesday, he speculated that the Amazon fires could have been caused by nonprofit organizations who are suffering from lack of funding, to "generate negative attention against me and against the Brazilian government."

Poirier warns that shrugging off the fires could embolden farmers to burn more and "land grabbers" to illegally occupy, parcel out, and resell plots of land to ranchers. There have previously been attempts to rein in these rainforest "mafia" - but these attempted crackdowns are rare and often met with strong public opposition.

All the while, the Amazon veers toward potential disaster.

"The Amazon is incredibly important for our future, for our ability to stave off the worst of climate change," said Poirier. "This isn't hyperbole. We're looking at untold destruction - not just of the Amazon but for our entire planet."-CNN