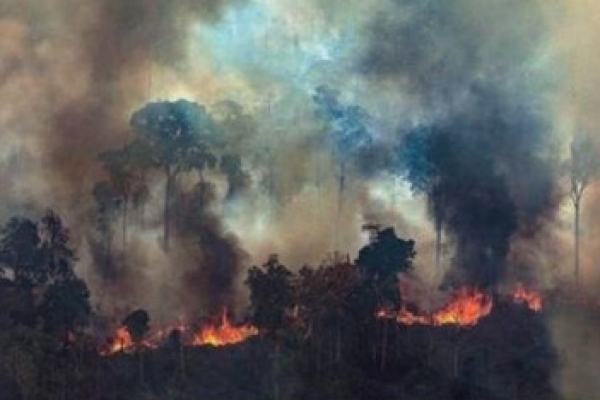 The Brazilian government has said it will reject an offer of aid from G7 countries to help tackle fires in the Amazon rainforest.

French President Emmanuel Macron - who hosted a G7 summit that ended on Monday - said $22m (£18m) would be released.

Brazilian officials gave no reason for turning down the money. But President Jair Bolsonaro has accused France of treating Brazil like a colony.

His defence minister said the fires in the Amazon were not out of control.

The minister, Fernando Azevedo e Silva, said 44,000 soldiers had been deployed to combat the fires and environmental crimes in the Amazon.

A record number of fires are burning in Brazil, mostly in the Amazon, according to the country's space research agency, Inpe. President Macron last week described the fires as an "international crisis".

Critics have accused Mr Bolsonaro of making deforestation worse in the Amazon through anti-environmental rhetoric.

The $22 was announced on Monday as the leaders of the G7 - Canada, France, Germany, Italy, Japan, the UK and the US - continue to meet in Biarritz, France.

Mr Macron said the funds would be made available immediately - primarily to pay for more fire-fighting planes - and that France would also "offer concrete support with military in the region".

But Mr Bolsonaro - who has been engaged in a public row with Mr Macron in recent weeks - accused the French leader of launching "unreasonable and gratuitous attacks against the Amazon region", and "hiding his intentions behind the idea of an 'alliance' of G7 countries".