Myanmar should take back Rohingyas: PM

Myanmar should take back Rohingyas: PM 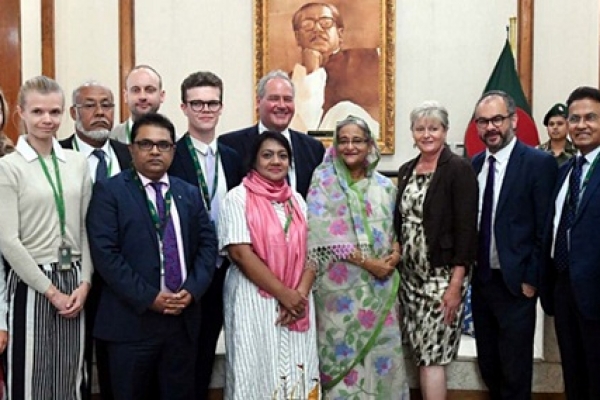 Describing Rohingyas as a big burden for Bangladesh, Prime Minister Sheikh Hasina today said Myanmar should take back their citizens.

She said this when two separate delegations of the UK All-Party Parliamentary Group (APPG) paid a joint courtesy call on her at the official residence Ganabhaban here.

“We have given shelter to the Rohingyas on humanitarian grounds as we had experienced the same thing during the Liberation War when an estimated 10 million Bangladeshis took shelter in India as refugees,” the Prime minister said.

“Now the Rohingyas have emerged as a big burden for us and the local people have to face immense sufferings for them,” the premier was quoted as saying.

The premier extended sincere thanks to the local people for accepting the sufferings on humanitarian grounds.

Two separate delegations of the visiting UK Conservative Friends of Bangladesh (CFoB) and the delegation of UK APPG on Population, Development and Reproductive Health paid a courtesy call on the Prime Minister.

The UK APPG delegation handed over a written report to the premier on their visit of the Rohingya camps in Cox’s Bazar.

The delegations appreciated the Prime Minister for her humanitarian gesture with giving shelters to the forcibly displaced Rohingyas and reiterated to continue their supports over the Rohingya issues.

Referring to their visit to Bangladesh two years back, the delegation said that the condition of the Rohingya camps have improved in comparison to that time.

Regarding Bangladesh-UK relations, the Prime Minister said Britain has continuously been giving assistance for the development of Bangladesh.

“It (the Bangladesh-UK relationship) will grow from extend to extend,” she added.

The delegation of UK APPG on Population, Development and Reproductive Health appreciated Bangladesh family planning policy adopted by Father of the Nation Bangabandhu Sheikh Mujibur Rahman after the 1971 Liberation War, saying, “The policy that was adopted by Bangabandhu is very effective in terms of controlling birth.”

The delegation members also said that the name of Bangladesh has been in many UK reports for its success over the family planning issues.

In reply, the Prime Minister said Father of the Nation Bangabandhu Sheikh Mujibur Rahman had envisioned of liberating the country and ensure economic emancipation of its people.

The Father of the Nation had started working in line with his dream to make Bangladesh free from hunger and poverty and took Bangladesh towards the desired progress during his government tenure of only three and half a years, she said.

But, when the country was progressing, Bangabandhu was assassinated along with most of his family members, said Sheikh Hasina, also the eldest daughter of Bangabandhu.

The premier said her government has been working tirelessly for the country’s development, adding that the rural areas are the basis of socio-economic development programmes taken by the Awami League government.

“My main task is to improve the condition of the rural areas and the rural masses,” she was quoted as saying.

On development of health sector, the Prime Minister said her government has set up community clinics during its 1996-2001 tenure to reach the healthcare services to the doorsteps of the people.

As many as 18,000 community clinics have so far been set up and 30 types of medicines are being provided free of cost, she said.

“Women and children are the main beneficiaries of the community clinics,” she added.

Regarding education, the Prime Minister said Bangabandhu made education free for the girls.