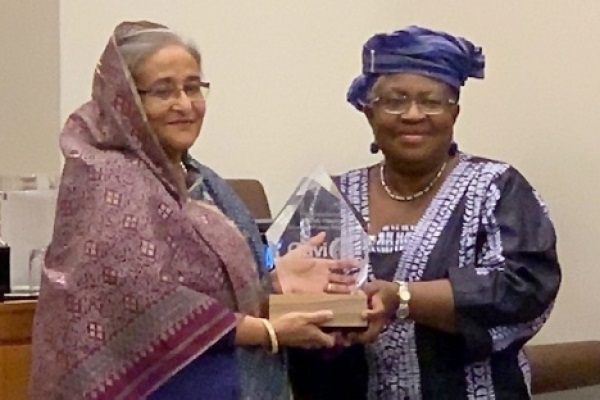 Global Alliance for Vaccination and Immunisations (GAVI), a global Vaccine Alliance, conferred the award on the prime minister at a ceremony at the UN Headquarters in New York on Monday evening local time.

Receiving the award from GAVI Board Chair Dr Ngozi Okonjo-Iweala, the prime minister dedicated it to the people of Bangladesh.

“The award that I received today is not of mine, the award belongs to the people of Bangladesh and I dedicated this award to them,” she said, reports BSS.

The prime minister simultaneously urged the countrymen to continue immunisation programme which will keep their children healthy.

“The healthy children will run the country and take the country forward …a healthy generation is very much necessary for economic development,” she said, adding healthy new generations will build a prosperous and developed Sonar Bangla as dreamt by Father of the Nation.

Sheikh Hasina said the country was freed from polio, cholera and various communicable diseases. “In this regard, we got cooperation from the GAVI,” she said.

Before handing over the award, a citation was read out by Dr Ngozi Okonjo-Iweala.

The citation said the ‘Vaccine Hero’ award has been introduced by the GAVI to recognize global figures whose dedication to the Vaccine Alliance’s mission has played a key role in helping GAVI and its partners to protect hundreds of millions of children across the globe.

It said this is an award for those who have set out a clear ambition and displayed urgency in providing life saving vaccines to children and ensuring that no child is left out.

Sheikh Hasina is a true champion of immunisation as well as rights of the children and the women empowerment, the citation reads.

Earlier in her written speech, Sheikh Hasina hoped to reach the target of ‘vaccines for all’ in the country well ahead of 2030. “We’re committed to immunising under universal health coverage with support from international community,” she said.

She recalled that Bangladesh was also honoured with GAVI Alliance Awards in 2009 and 2012 for its outstanding performance in improving the child immunization status.

Terming immunization as the greatest public health success story in Bangladesh, the prime minister extended her thanks to the Vaccine Alliance and other partners for their continued support and contributions to this end.

The premier also elaborated her government’s further steps to integrate immunisation with other primary healthcare services at all levels.

Referring to influx of the forcibly displaced Rohingyas in Cox’s Bazar, the prime minister said the sudden exodus of 1.1 million Rohingyas from Rakhine State is a formidable challenge to Bangladesh’s health sector.

She said extraordinary measures were taken to raise immunity of the Rohingyas through vaccination campaign and routine immunization although they did not have access to any proper health services in Myanmar.

Besides, Bangladesh is the first country to use GAVI’s updated fragility, emergency and refugees’ policy to carry out GAVI-supported vaccination campaigns for Rohingyas in Cox’s Bazar in 2017.

The prime minister reiterated that ensuring health and nutrition to all has always been a commitment to the people.

In this regard, she vowed to advance the country to a stage where it would be able to ensure basic healthcare and sufficient nutrition for all through Visions 2021 and 2041.