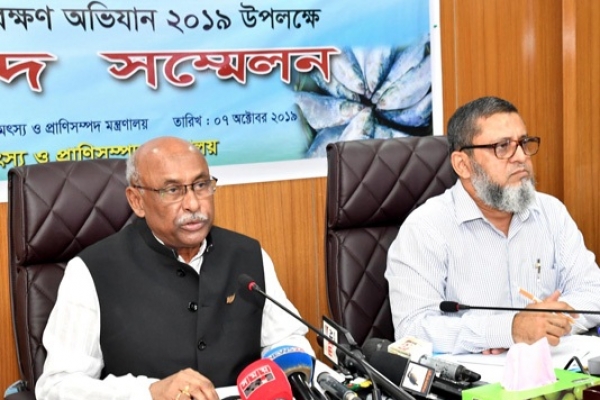 The government has banned Hilsa catching, selling, transporting, hoarding and marketing for 22 days from October 9-30 to protect mother Hilsa for ensuring safe breeding.

“To increase the production of Hilsa, a notification has been issued prohibiting the collection, transporting, marketing, purchase and storage of Hilsa in the main breeding season from October 9-30 in the country along with the 7,000 sq km areas of Hilsa breeding centers under the ‘Hilsa Conserving Drive-2019′”, a press release quoted Fisheries and Livestock Minister Ashraf Ali Khan Khasru saying that.

He made the remarks at a press briefing on the occasion of government declaring ban on fishing Hilsa.

He said that about 80 percent of the total Hilsa produced in the world is derived from the rivers, estuaries and seas of Bangladesh and in the last ten years, the average production of Hilsa has increased by about 5.26 percent, the release added.

“Under the government led Prime Minister Sheikh Hasina in fiscal 2008-2009, Hilsa production was 2.98 tons while it stood to 5.17 tons increasing by 73% during the fiscal year 2018-19 because of the prohibition in catching mother Hilsa in breeding seasons”, he commented.

Emphasizing on PM’s parallel initiatives taken for the fishermen he also said, “For the first time, under the directives of the Prime Minister, a total of 4,14,784 fishermen families of coastal fishery areas were provided with 35,948 metric tons of food assistance during the 65 days of fishing ban”.