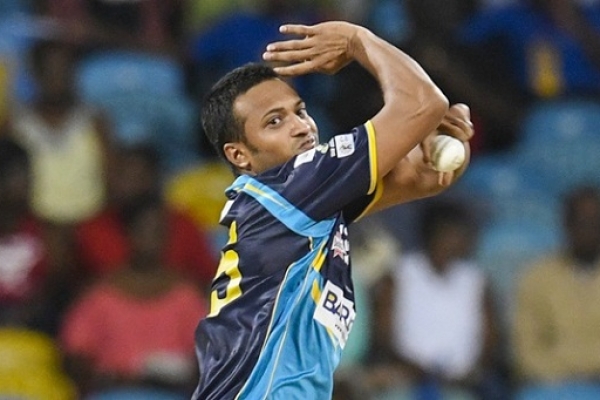 Shakib Al Hasan's CPL T20 side Barbados Tridents won the Caribbean Premier League for the second time as they trounced Guyana Amazon Warriors by 27 runs in the CPL final on Saturday in Trinidad.

It was the end of the perfect run for Warriors as they lost their fifth final after 11 consecutive wins. Jonathan Carter's late blitz gave Tridents 171 for 6 before Ashley Nurse - with figures of 4-0-17-2 - sealed the chase for them by restricting Warriors to 144 for 9.

After the coin fell in Jason Holder's favour, Alex Hales and Johnson Charles gave Tridents a steady start as they scored 43 in the first five overs before the former fell to Romario Shepherd in the last over of the powerplay. There was another jolt soon after as Philip Salt, playing his first game of the tournament, was dismissed for a duck by Romario Shepherd. Shai Hope laboured for 12 balls for his eight while Shakib Al Hasan was dismissed for a run-a-ball 15.

Jason Holder too made an early exit as two runs outs - of Shakib and the Tridents captain by Keemo Paul - left the team hurting at 108 for 6 in the 15th over. Carter, though, was in no mood to give up as he slammed a 27-ball 50 and scored 63 in the last 5.1 overs with Nurse. Carter got going with two boundaries against Imran Tahir and then moved steadily to 32 off 20. Paul then was struck for two sixes and a four as Tridents raced past 150. The final over from Shepherd started on a poor note as picked up a four and six and then completed his half-century off 26 balls to give the bowlers a fighting chance.

Warriors kept losing wickets and failed to build any sort of momentum to threaten Tridents. After the early loss of Chandrapaul Hemraj, Shimron Hetmyer gave the side some hope when he struck a Jason Holder for a six. However, Raymon Reifer (4 for 24) quickly brought an end to Hetmyer's aggressive approach in the fourth over with 30 on the board. Shoaib Malik made 4 off 11 while Nicholas Pooran managed 24 off 25.

Brandon King made 43 off 33 but the struggle of the middle order meant they were left with too much to do in the last four overs with 67 more needed. Paul did get some hits in - scoring 25 off 14 - but Harry Gurney and Reifer kept tightening the noose to deliver the title.