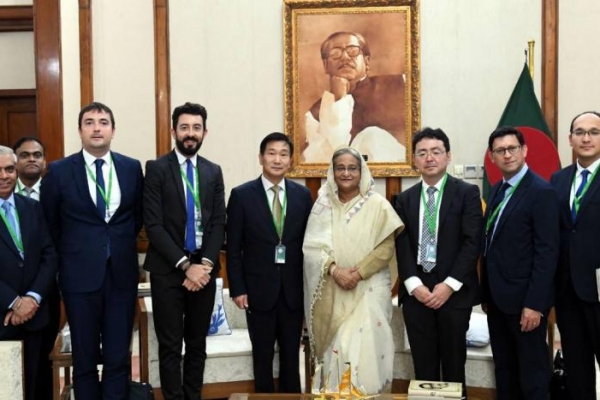 Prime Minister Sheikh Hasina emphasized the need of quick repatriation of the Rohingyas, who fled persecution in Myanmar.

Her remarks came on Wednesday (Oct 16), when a seven-member delegation of the Asian Development Bank (ADB) called on her at the official residence Ganabhaban, reports BSS.

“It will be better for Bangladesh as quickly as we send back Rohingyas,” Press Secretary to the PM Ihsanul Karim quoted her saying while briefing the media.

Dubbing Bangladesh as a dependable partner, ADB said it will stay beside Dhaka as a development partner to supplement its forward march, according to the state news agency.

“ADB will remain as a development partner of Bangladesh,” said In-chang Song, the team leader of seven-member visiting team of the ADB Board of Directors representing 33 countries.

It also assured Bangladesh of continuing its support for repatriation of the Rohingyas, says the BSS report.
The ADB also lauded the rapid reduction of poverty and the high GDP growth and progress in climate change mitigation and food security, saying, “Bangladesh has achieved much progress in attaining food security and climate change mitigation.”
One of the ADB directors Kris Panday appreciated Bangladesh for its massive development saying, “Bangladesh has made a remarkable progress in various sectors particularly transportation, energy and housing.”

The ADB director underscored the need for continuation of the regional connectivity and integrity for the sake of the development.
Spelling out massive development works carried out by her government, the premier said, “My government has given priority to the village people and rural areas as the centre of overall development of the country.”

“We made some policies before coming to power and we are implementing those accordingly,” she was quoted as saying.
“My team has been working hard to expedite the development activities and the government is successfully engaged the common people in the development endeavours,” she said.

Hasina said her administration had chalked out the development plans well before assuming office and later started implementing the programmes after coming to power for the development the country.

The government is currently setting up 100 economic zones which will help expedite the pace of development.
Mentioning that she opened all sectors including energy, telecommunication and transport to the private sector, Hasina said it is now contributing to the development of the country.

The government has taken social safety net programmes including widow allowance to bring the under-privileged in the mainstream, she said.
About the connectivity, Hasina said the Bangladesh, Bhutan, India and Nepal (BBIN) Initiative and the Bangladesh-China-India-Myanmar (BCIM) economic corridor are there to strengthen the regional connectivity.