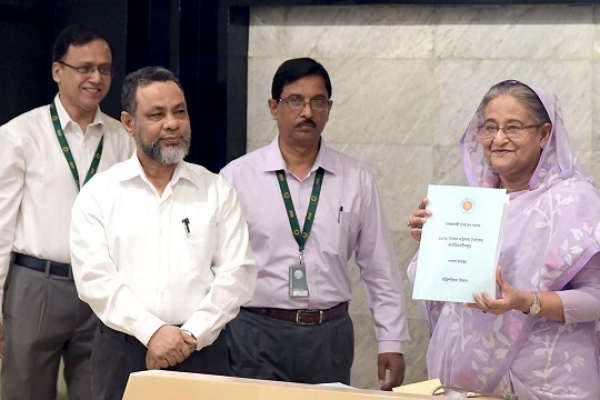 Prime Minister Sheikh Hasina on Monday received as souvenir proceedings of 1972 cabinet meetings with Father of the Nation Bangabandhu Sheikh Mujibur Rahman in the chair as the Cabinet division dug out the documents.

Cabinet Secretary Mohammad Shafiul Alam handed over the proceedings to the premier in three forms – the scanned ones of the main English version, the translated versions in Bangla and rewritten verbatim copies in English, BSS reports.

An official familiar with the meeting said the government’s top bureaucrat handed over Sheikh Hasina the documents at the outset of the cabinet meeting today at her Tejgaon office.

Bangabandhu had presided over the cabinet meetings as the Prime Minister of the post independence government.

The cabinet secretary today handed over as well a copy of the check-list of all important programmes and activities of the Cabinet Division to the premier.

State Minister for ICT Division Junaid Ahmed Palak and Senior Secretary of the ministry of Information and Communication Technology (ICT) NM Ziaul Alam, meanwhile, handed her over a copy of the strategy paper formulated by the Division.

The ICT Division framed the strategy paper in light of its action plan adopted to ensure use of information and communication technology in all sectors.

The action plan and its subsequent strategy paper were formulated as per Awami League’s election manifesto to turn Bangladesh into a digital nation.

The state minister and the senior secretary also presented her an ICT Division publication titled “10 Years of Advancement of Digital Bangladesh under the leadership of Prime Minister Sheikh Hasina”.

Ministers, state ministers and secretaries concerned were present at the meeting.