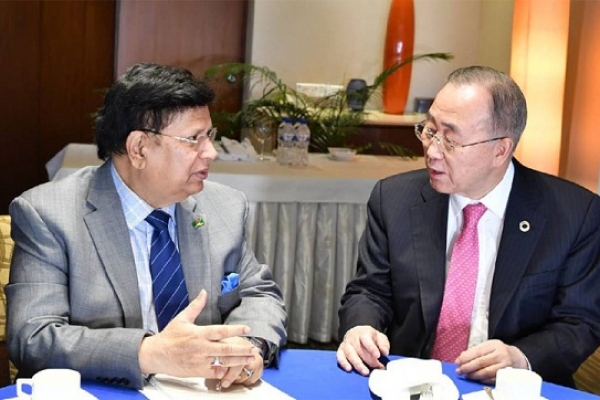 Former UN secretary general Ban Ki-moon on Saturday called for a political solution to the Rohingya crisis allowing them to return to their places of origin in Rakhine state "freely and safely".

"There should be a political solution," he told reporters after his meeting with Foreign Minister Dr AK Abdul Momen at a city hotel seeking Myanmar's steps to end the Rohingya crisis.

"It was hard to describe," he said, describing his experience of visiting Rohingya camp last time.

He laid emphasis on global solution to these global challenges saying Bangladesh is one of the most vulnerable countries to climate change.

Ban said he has been telling across the world about the very successful story of Bangladesh in climate adaptation.

He said Bangladesh is doing excellent.

The former UN chief arrived on Friday night on a brief visit, the second visit to Bangladesh this year, after leaving the United Nations. He is scheduled to attend the 13th convocation of Brac University to be held at the Army Stadium on Saturday afternoon.

Ban said he felt honoured to talk about opportunities and challenges with young students and future leaders and share his thoughts on how the challenges can be overcome.

He was scheduled to attend lunch hosted by Brac in his honour on Saturday.

Vice-Chancellor of Brac University Professor Vincent Chang and senior officials from the Ministry of Foreign Affairs were present.

In July last, Moon attended the ‘Dhaka Meeting of the Global Commission on Adaptation’ held in the capital.

During his first visit to Bangladesh after leaving the UN, Brac University President and Vice-Chancellor Prof Vincent Chang invited Ban, the current chairman of Global Commission on Adaptation, to visit Brac University and energise students to participate further in the global arena.