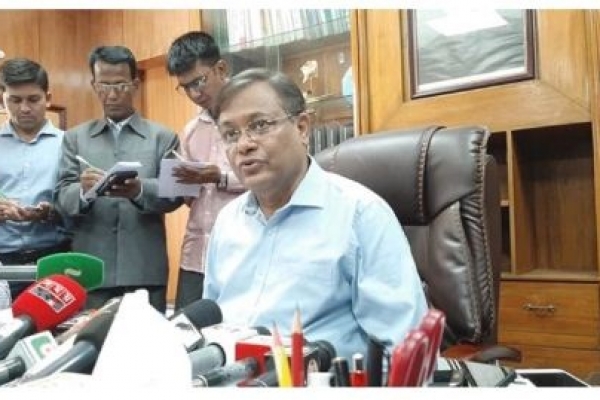 Information Minister Dr Hasan Mahmud today said the government has decided to start registering the online news portal from next week, adding steps would be taken against those which will not get registration, reports BSS.

“The Home Ministry has scrutinized the documents of several hundred online news portals . . . The government will give registration to online news portals from next week after examining the related papers,” he told a press briefing at his Secretariat office here.

Hasan said online media will be introduced through maintaining proper process in future. None can launch any online news portal without registration, he added.

He also said discipline has been established in the electronic media sector following the government’s different steps. The government will take actions if there is any irregularity in the sector, he added.

The minister said some television channels are airing foreign TV serials dubbed in Bangla which is not acceptable.

“So, the ministry has issued an order for TV channels to take the government’s approval to broadcast the dubbed serials. Many TV channels have already taken approval to run those serials. A preview committee has been formed to oversee the matter,” he added.

He said an additional secretary remained at the helm of the committee where eminent cultural personalities Mamunur Rashid and Begum Sara Zaker, director general or representative of Bangladesh Television, director general of National Institute of Mass Communication, representatives of Association of Television Channel Owners and Directors’ Guilt and Obhinay Shilpi Sangha are the members of the committee.

“We have already taken initiatives for the betterment of mass media . . . these initiatives put media in order mostly,” he said.

The minister went on saying that the government gave license to the mobile companies to run mobile network only.

“We have already sent a letter to the telecommunication ministry to stop this. We are determined to bringing discipline in this sector and legal actions will be taken in this regard,” he added.

Replying to a question, Hasan said many newspapers, online news portals and television channels are showing video contents through their respective online media which is also not acceptable. “We are working to bring those media in order,” he added.

“The BNP chief is in prison being convicted in a graft case and only the court can release her,” he said, adding, “BNP always gives threat that they will wage a movement to release Begum Khaleda Zia . . . but her release is the matter of the court and there is no other way.”