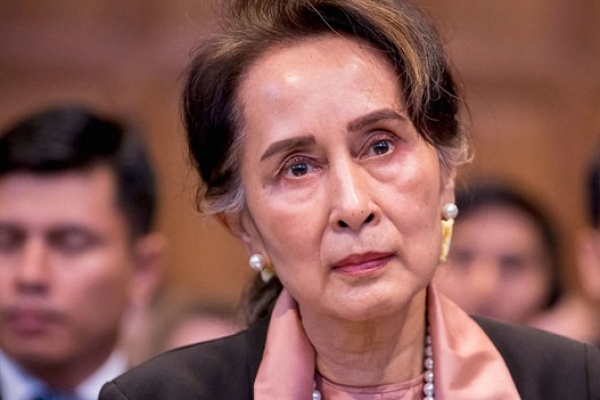 The Nobel Prize Laureate has offered a defense of the Burmese military's actions that triggered an exodus of Rohingya. Gambia had taken the case to the UN court, saying it should take all measures to prevent genocide.

Myanmar leader Aung San Suu Kyi on Wednesday rejected allegations put forward in a genocide hearing at the International Court of Justice (ICJ) in The Hague.

The Nobel Peace Prize laureate claimed that an internal armed conflict prompted by attacks on police posts in Rakhine State had triggered a mass exodus of Rohingya, saying it did not amount to genocide.

"International justice resisted the temptation to use this legal classification because the specific intent to destroy the targeted group in whole or in part was not present," Suu Kyi told judges at the UN court.

She argued that while there may have been a disproportionate use of force against members of the Rohingya population, it was not a campaign directed at the country's Muslim minority.

Gambia, acting on behalf of the Organization of Islamic Cooperation, had brought the case to the ICJ, arguing that it should take action "within its power to prevent all acts that amount to or contribute to the crime of genocide" in Myanmar.

The US, Canada and the Netherlands hold the military responsible for summary executions and "clearance operations" targeting Rohingya. But Suu Kyi said that the latter formed part of a counter-terrorism strategy aimed at uprooting extremist militants.

In 2017, Myanmar witnessed the worst sectarian violence in years, with Burmese security forces and Muslim-minority Rohingya militants accusing each other of burning down villages and staging mass killings.

That year, more than 730,000 Rohingya fled to Bangladesh, where many remain in squalid refugee camps.

Gambian Justice Minister Aboubacarr Tambadou on Tuesday urged the court to "tell Myanmar to stop these senseless killings, to stop these acts of barbarity that continue to shock our collective conscience, to stop this genocide of its own people."