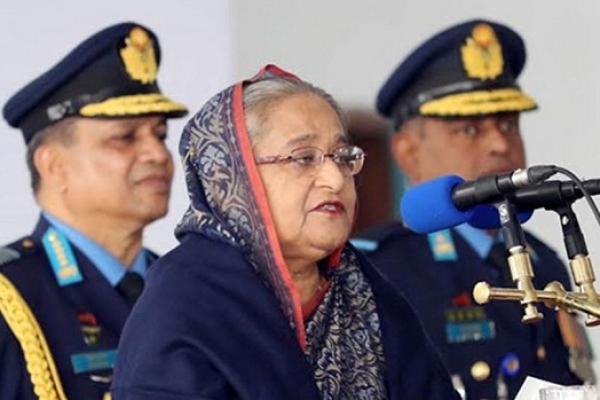 “Today is a day of joy and important as well for you all. From now on, you have been entrusted with the duty of protecting the sovereignty and independence of the country. You’ll have to remain alert and prepare all the time to discharge your duty accordingly,” she said.

She said this while addressing a ceremony at the parade ground of the Bangladesh Air Force Academy in Jashore marking the President Parade-2019 of the passing out cadets of no 76 BAFA Course and DE-2018 Course.

The premier greeted the freshers and said, “It is your first and prime responsibility to protect the country’s independence and sovereignty by even making the highest sacrifice”.

She also expressed her hope that the newly-commissioned cadets would always stand beside the people and serve the country by self-sacrifice.

Mentioning that patriotism and dutifulness is the motto of a soldier, she said, “There is no way to divert the way. Improved character and mental strength can establish a soldier as an ideal one.”

The prime minister instructed the freshers to obey the order of their senior officers and maintain the chain of command to make the air force a well-disciplined one.

She simultaneously asked the newly commissioned cadets to be remained prepared all the time to enhance the professional excellence with proper utilisation and practice of the training taken from the air force academy.

Sheikh Hasina advised the new air force officers to develop themselves as the competent successors of the future leadership being imbued with the honesty, sincerity and integrity.

“I personally believe, you will discharge your duties to make the sky of Bangladesh free, being inspired with the patriotism and respectful to the Constitution,” she said.

In this context, the premier recalled the speech of Father of the Nation Bangabandhu Sheikh Mujibur Rahman at the passing out cadets of the air force in 1975.

Quoting some parts of the speech, Sheikh Hasina, also elder daughter of Bangabandhu quoted him (Bangabandhu) as saying, “I as the Father of the Nation asked you all to love the country staying in the path of honesty. You will be a human being if you always stand beside the justice, obey your guardians, and keep up discipline (in your life).”

The premier asked the freshers to bear in the mind the advices of Bangabandhu and follow it in the days to come.

She hoped that the newly commissioned BAF officers would take the air force to a new height of success.

The premier greeted the parents of the new officers and recalled their contribution behind the success of their children and urged them to pray for them (new air force officers) as their children become the “ideal of the patriotism and bravery”.

The premier added that the “Forces Goal-2030” has been formulated in light of the “Defence Policy” of 1974 adopted by the Father of the Nation, which is being implemented in phases.

Sheikh Hasina said that the Father of the Nation had a dream to build a modern, strengthened and professional air force considering Bangladesh’s geographical location, strategic military aspect, and scope and potential of the economic development.

The premier said the most ultramodern fighter aircraft of that time MIG-21 supersonic fighter plane, helicopter, air defence rudder and other necessary equipment had been added to the air force due to his (Bangabandhu’s) farsighted and strong decision.

She said that Bangabandhu Aeronautical Centre was built aimed at maintenance of the various types of aircraft including fighter plane, rudder and other equipments in a smooth, safe and economical manner.

The premier added that “Bangabandhu Sheikh Mujibur Rahman Aviation and Aerospace University” aimed at progressing the aviation sector of Bangladesh.

She said the air force has the capacity of overhauling the fighter plane using its own manpower, technology and technical efficiency. The premier said today’s air force is totally different in comparison to that of a couple of decades ago in terms of infrastructure, strategy, and technology.

She went on saying, “The current air force is much more developed, efficient, and professional due to having modern training and equipment as well.”

The premier said the incumbent government has been putting emphasis on modernisation of the training to enhance the overall efficiency of the air force.

said that the training period has been increased with a view to enhancing the standard of the basic training as well as organisational efficiency of the air force personnel. So that the cadets get the chance of completing their graduation.

Noting that the ultramodern and world standard “Bangabandhu Complex” has been built for the air force academy, she said, “I hope the initiative will play a significant role in developing a trained and modern air force.”

Spelling out various measures taken by her government for the overall development of Bangladesh, the prime minister said, “We have been able to make Bangladesh a developing country. We have taken policy to turn Bangladesh into a developed and prosperous country and started working accordingly.”

The birth centenary of the Father of the Nation and the golden jubilee of the independence will be celebrated in 2020 and 2021 respectively, she said, “We want to make our national flag of independence more brighter in the world.”

The premier earlier distributed various prizes among 104 promising young officers who are stepping out of the academy and entering into air force career after successful completion of the courses.

Officer Cadet Zarin Tasnim received ‘Chief of Air Staff Trophy’ for his best all round performance in No 76 BAFA Course (Ground Branch). Officer Cadet Sifat Hasan Alam was presented ‘Commandants Trophy’ for his best performance in General service Training in No 76 BAFA Course. No 2 Squadron was adjudged the Champion Squadron and was accorded Academy colour.

She also joined an epaulette wearing ceremony and a photo session with the fresh air force officers and later cut a cake on the occasion.