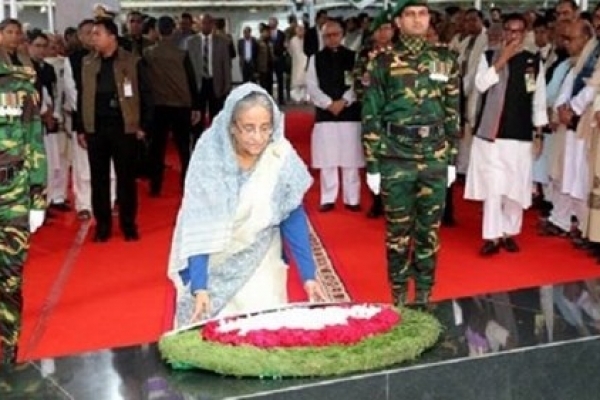 Prime Minister Sheikh Hasina today paid rich tributes to Father of the Nation Bangabandhu Sheikh Mujibur Rahman on the occasion of the Homecoming Day of the great leader.

The premier paid the homage by placing wreaths at the portrait of the Father of the Nation in front of Bangabandhu Memorial Museum at Dhanmondi here this morning.

After laying the wreaths, the prime minister stood in solemn silence for some time as a mark of profound respect to the memory of Bangabandhu, the architect of independence.

Flanked by ministers and central leaders of Bangladesh Awami League, Sheikh Hasina, also the president of the party, placed another wreath at the portrait of Bangabandhu on behalf of her party.

Bangabandhu, the undisputed leader of the nation and supreme commander of the country’s Liberation War, returned to the sacred soil of independent Bangladesh via London and New Delhi on January 10 in 1972, after 290 days of confinement in Pakistan jail.

Since then, the nation is observing the day as the Homecoming Day of the Father of the Nation.

This year, the observance of the Bangabandhu’s Homecoming Day is very significant as the nation is going to celebrate the great leader’s yearlong birth centenary programmes from March 17.

The countdown for the birth centenary celebration will begin from the Homecoming Day today.

Prime Minister Sheikh Hasina will inaugurate the countdown for the yearlong birth centenary celebration at the National Parade Ground at Tejgaon here this afternoon.