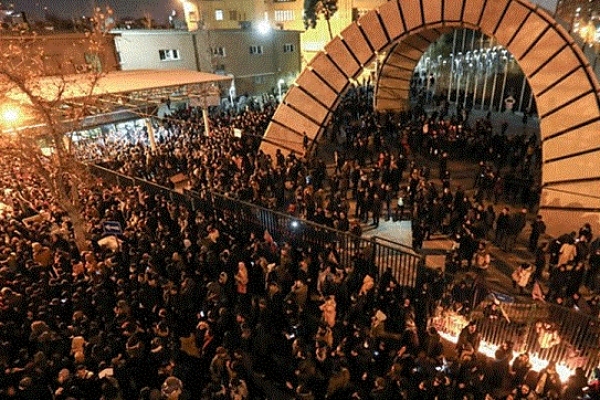 Thousands of protestors flooded the streets of Tehran days after Iran shot down a Ukrainian commercial airliner, killing all 176 passengers on board.

Emotional vigils for the passengers who were killed in the attack devolved into fiery demonstrations that saw Iranians marching with signs to demand the resignation of the country's leader, Ayatollah Ali Khamenei.

In video captured by The New York Times, angry protestors chanted "death to the dictator," and "shameless," with protestors on university campuses reportedly calling the Islamic Revolutionary Guards Corps "incompetent" and "the people's shame."

Tensions in the country reached a breaking point when Ukrainian Airlines Flight 752, which was carrying at least 130 Iranian citizens, was shot down on January 8 by Revolutionary Guard air defense forces after it took off from Tehran.

The country initially denied responsibility for the plane crash, suggesting it was a mechanical problem. However, in a statement released by military officials early January 11, Iran admitted to hitting the plane with a missile.

Despite the statement, foreign minister Javad Zarif immediately pointed some blame at the US, saying the crash was caused by "human error at a time of crisis caused by US adventurism."

US-Iran relations quickly devolved as the countries have traded barbs since Iran's attacks in retaliation to the US killing of Qassem Soleimani, a top military official, who was killed by a drone strike ordered by President Donald Trump.