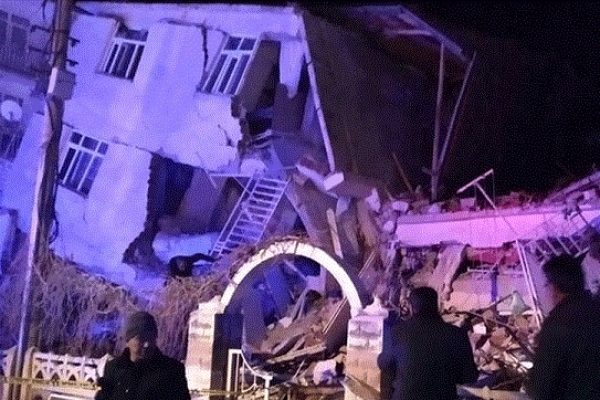 A powerful earthquake has killed at least 18 people and injured hundreds in eastern Turkey, as rescue teams searched through the rubble of collapsed buildings for survivors early on Saturday.

At least 30 people were missing following the magnitude 6.8 quake, which had its epicentre in the small lakeside town of Sivrice in the eastern province of Elazig.

"It was very scary, furniture fell on top of us. We rushed outside," 47-year-old Melahat Can, who lives in the provincial capital of Elazig, told AFP.

President Recep Tayyip Erdogan said all steps were being taken to aid people affected by the quake, which caused widespread fear.

"We stand by our people," Erdogan said on Twitter.

People who fled their homes in panic were lighting fires in the streets to stay warm in freezing temperatures.

Turkish television showed images of people rushing outside in panic, as well as a fire on the roof of a building.

Interior, environment and health ministers said at least 18 people were killed, 13 of them in Elazig province and five others in the neighbouring province of Malatya, which lies to the southwest.

Some 553 people were injured, they said.

"There is nobody trapped under the rubble in Malatya but in Elazig search and rescue efforts are currently under way to find 30 citizens," Interior Minister Suleyman Soylu said.

Rescue teams were searching for survivors trapped in a five-storey collapsed building in a village some 30 kilometres from Elazig, according to AFP journalists at the scene. One person was pulled alive from the rubble.

Sports centres, schools and guest houses had been opened to accommodate quake victims in Malatya.