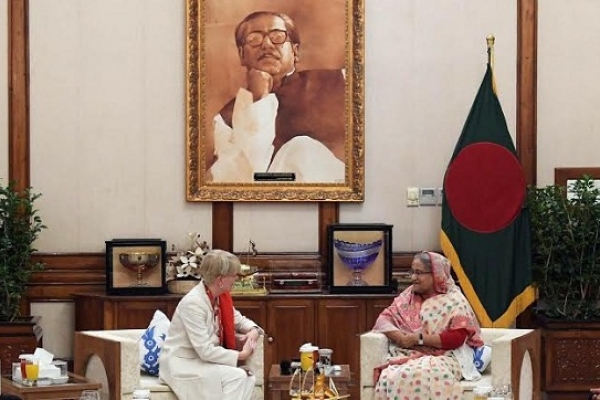 A delegation of the British Society of Gastroenterology (BSG) led by its President Dr Cathryn Edwards today paid a courtesy call on Prime Minister Sheikh Hasina at her official residence Ganabhaban this afternoon.

During the meeting, Edwards explained the importance of the BSG in the UK and its role in contributing to the delivery of training and clinical best practice standards in Gastroenterology and Hepatology along with facilitating specialty research.

The premier said her government will continue its support to their efforts to ensure enhanced treatment facilities for the patients of gastroenterology and hepatology.

Edwards told the prime minister that the BSG has established strong links with the Bangladesh Gastroenterology Society (BGS) over the past seven years.

She added that the BSG recently inked a Memorandum of Understanding (MoU) with the BGS with the aim of supporting BGS colleagues to establish a National Training Programme for Endoscopy based at the Sheikh Russel GastroLiver Institute and Hospital at Mohakhali in Dhaka.

Welcoming the initiatives, the prime minister assured them of providing necessary supports from the government side.

Highlighting her government’s initiatives, Sheikh Hasina said that they had introduced Gastroenterology department in 13 Medical Colleges across the country.

Besides, web cameras have been installed at the hospitals up to Upazila level across the country, she said adding that the government has also been providing necessary training to the nurses to increase their efficiency.

Dr Edwards said the establishment of a national endoscopy training programme in Bangladesh will help promote standardisation of care for patients with GI diseases.

She said the MOU will bring an opportunity for reciprocal learning and collaborative research between the two Societies.

The British Society of Gastroenterology is a registered charity and one of the largest medical gastroenterology and hepatology communities in the UK.

It has over three thousand members drawn from the ranks of physicians, surgeons, pathologists, radiologists, scientists, nurses, dieticians, physiologists and others interested in the field.