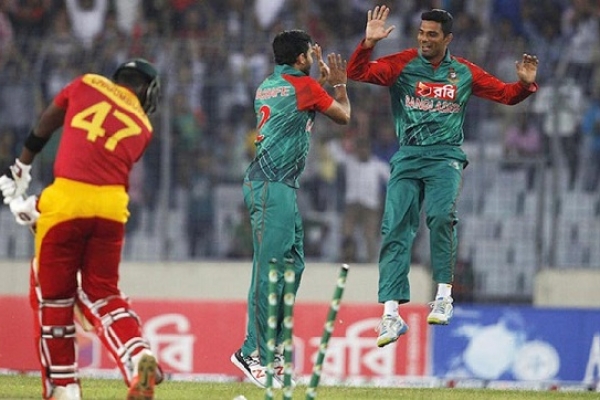 Opener Liton Das struck a sublime century as Bangladesh made a crushing start to the three-match ODI series, romping to a facile 169-run victory over Zimbabwe in the first match at the Sylhet International Cricket Stadium here on Sunday.

This was their biggest ODI win in the history, surpassing the record of 163-run victory over Sri Lanka in 2018 at Sher-e-Bangla National Cricket Stadium.

Liton was key in helping Bangladesh compile 321-6, their highest total against Zimbabwe with his career best 126 off 105. Later the bowlers made it more than enough by dismissing a hapless Zimbabwe for 152 in just 39.1 overs.

The opener who smashed 13 fours and two sixes in his second ODI century before being retired hurt helped Bangladesh make a good start after Mashrafe Bin Mortaza opted to bat first.

Middle order batsman Mohammad Mithun hammered a 41 ball-50 with five fours and one six while Saifuddin was not out, after making a whirlwind 15 ball-28 with three sixes, which pushed the score part 300.

In what was a batting paradise, senior opener Tamim Iqbal once again made a slow start and struggled to find a gap for rotating scoreboard in the first power-play. Liton amended Tamim’s slower knock by pacing the scoreboard and in doing so prevented Zimbabwe bowlers from hurling the baton.

Debutant off-spinner Wesley Madhevere trapped Tamim for leg-before on 24 off 43 for his maiden International wicket and brought an end to the 60-run opening partnership.

Tamim’s departure brought Nazmul Hossain Shanto in the crease and the combination of Shanto and Liton gave Bangladesh innings the pace that they needed.

They shared 80-run for the second wicket before Tinotenda Mutumbodzi had Shanto leg-before for 29.

But Liton continued to treat the bowlers with utmost disdain and finally brought up his century off 95 balls with an elegant flick that raced to boundary. He kept charging the bowlers until a hamstring injury cut short his stay in the crease.

Bangladesh however saw a mini collapse in the middle order when the likes of Mushfiqur Rahim (19) and Mahmudullah Riyad (32) failed to capitalize on their start.

However Mohammad Mithun brought the side back on track and along with Saifuddin helped the side propel past 300-run mark .

Chris Mpofu was the most successful bowler for Zimbabwe with 2-68 while Carl Mumba, Madhevere, Tiripano and Mutumbodzi took one wicket apiece.

Playing his first match after recovering from the recurring back injury, Mohammad Saifuddin helped Bangladesh bowlers rule the rooster right from the Zimbabwe’s chase.

He rattled the stump of opener Tinashe Kamunhukamwe (1) in his first over before getting the better of Regis Chakabva for 11. At the other end, skipper Mashrafe Bin Mortaza dismissed his opposite number Chamu Chibhabha (10) for his first wicket after five matches. Mashrafe took just one wicket in eight World Cup matches before this series.

The spinners then appeared in the stage to further torment the visitors with the combination of left-arm spin of Taijul Islam and off-spin of Mehidy Hasan Miraz slicing the middle order.

Amid the devastating situation, debutant Madhevere made a resistance to keep Bangladesh waiting. Mehidy Miraz ended his resistance after he made team’s highest 35 off 44 with five fours.

The lower order then crumbled under pressure to hand Bangladesh the big victory. Tinotenda Mutumbodzi with 24 and Sikandar Raza with 18 were the other two notable scorers for Zimbabwe.

The second ODI between the two sides is on Tuesday at the same venue.