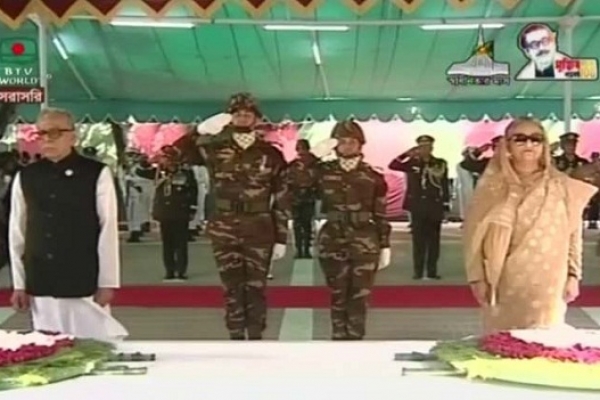 The President and the Prime Minister paid homage by placing wreaths at the mazar (mausoleum) of Bangabandhu in Tungipara of Gopalganj at 10:17 am on Tuesday.

President Hamid first laid a wreath at the mazar of Bangabandhu followed by the Prime Minister.

After placing the wreaths, they stood in solemn silence for some time as a mark of profound respect to the memory of Father of the Nation, also the architect of independence.

A smartly turned out contingent drawn from Bangladesh Army, Navy and Air Force gave a guard of honour on the occasion.

Abdul Hamid and Sheikh Hasina offered Fateha and joined a munajat seeking eternal peace of the departed souls of Bangabandhu as well as other martyrs of the August 15 carnage.

Later, the President signed the visitor’s book kept on the mazar premises.

Flanked by senior leaders of the party, Sheikh Hasina, also the Awami League president, placed another wreath at the mazar of Bangabandhu on behalf of her party.

Taking family members with her, the Prime Minister placed another wreath at the mazar of Bangabandhu.

The Prime Minister flew to Tungipara after placing wreaths at the portrait of Bangabandhu in front of Bangabandhu Memorial Museum at Dhanmondi Road No 32 in the capital city.

On March 17 one hundred years ago, Bangabandhu, the greatest Bangalee of all time, was born to a respected family at Tungipara village of the then Gopalganj sub-division, now a district as the third among six children of Sheikh Lutfur Rahman and Saira Khatun.

The birth centenary of Bangabandhu is being celebrated across the country today as the National Children’s Day.

The government declared the period from March 17, 2020 to March 26, 2021 as the ‘Mujib Borsho’ marking the birth centenary of Bangabandhu. Along with Bangladesh, the ‘Mujib Year’ is being celebrated globally with the initiative of UNESCO.

The government had chalked out various programmes, including a grand opening ceremony, to be observed throughout the year.

However, the programmes have been rescheduled following the detection of coronavirus in Bangladesh.

The grand inaugural ceremony which was scheduled to be held at the National Parade Ground today has been postponed and it will be held later.

The celebrations will begin with fireworks at 8:00pm at the Suhrawardy Udyan today.