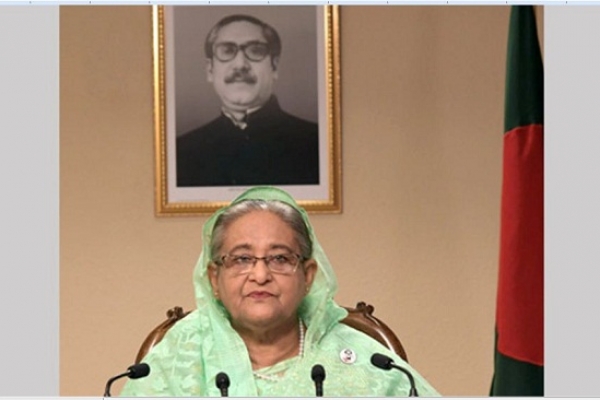 Prime Minister Sheikh Hasina today called upon the new generation to build themselves as worthy citizens by following Bangabandhu’s ideology, saying that the people of the country will stay awake with his ideology and uphold the flag given by him forever.

“You (father) are lying near the lap of your parents under the green-covered ground in Tungipara. Father, sleep in peace … your Bangladesh is marching towards advancement at an indomitable pace and will go ahead further,” she said in her nationwide address on the occasion of the inauguration of the birth centenary celebration of Father of the Nation Bangabandhu Sheikh Mujibur Rahman.

The premier added: “The people of the country and the generation after generation will stay up bearing your ideals in the hearts in your dreamt Sonar Bangladesh … the flag given by you will fly forever.”

In this connection, Sheikh Hasina quoted a famous song of Kabiguru Rabindranath Tagore.

“Tomar pataka jare dao (those whom you give your flag), tare bohibare dao shakti (give him strength to bear it). Tomar sebar mahot proas sohibare dao bhakoti (give devotion to have patience for the noble initiative of service).”

The speech of the prime minister was aired simultaneously by all electronic media, including Bangladesh Television (BTV), Bangladesh Betar, online and social media.

Sheikh Hasina said today Bangladesh has taken a prestigious position around the world. “We’ve to advance further by building a hunger-and-poverty-free developed and prosperous Bangladesh as dreamt by the Father of the Nation,” she said.

The prime minister called upon the children, juveniles and youth-folk to love the country and its people and build themselves as good citizens being imbued with the ideology of the Father of the Nation.

“It’s my appeal to today’s children, juveniles and youths to love the country and its people as we earned independence at a cost of a huge sacrifice,” she said.

Sheikh Hasina went on saying: “You’ve to love the people in the way the Father of the Nation did it … you’ve to build yourselves as worthy citizens so that as an independent nation, you can move on the world stage by holding your head high.”

The prime minister said brutal bullets of killers took away the life of the Father of the Nation and they (killers) tried to wipe out his name from the history of Bangladesh, but they could not succeed.

“The murderers could not realise that from the stairs of Road No. 32 residence, Bangabandhu’s blood spread across the country by giving birth to crores of Mujib,” she said.

Sheikh Hasina said the people of Bangladesh have awakened in the quest of the truth. “The history and the truth cannot be suppressed by the falsehood,” she said.

The prime minister said the birthday of Bangabandhu is not being celebrated only in Bangladesh, it is also being observed across the globe. “The whole world came to know Bangabandhu by dint of his sacrifice,” she said.

Sheikh Hasina said today is March 17 and on this day in 1920, a great man was born in this Bangla and “he is my father, Sheikh Mujibur Rahman.”

The prime minister said Bangabandhu gifted this state named Bangladesh and gave Bangalees the status of self-identity as a nation. “That’s why he is our Father of the Nation,” she said.

Sheikh Hasina said sacrificing all happiness and amusement, Bangabandhu had struggled, and suffered jail time and again in his entire life aiming to free the distressed people from the vicious circle of hunger and poverty.

“The plight of people had hurt him and he didn’t hesitate to do any sacrifice to establish the rights of underprivileged people. He had become the dearest to the people of this land and that’s why he is Bangabandhu,” she said.

The prime minister said since his childhood, the Father of the Nation used to be saddened seeing the sufferings of the people.

She said Bangabandhu had distributed his personal belongings like clothes, books and umbrellas among the poor.

“Even he (Bangabandhu) had shared his meals with others and during the famine, he distributed ‘his stored paddy’ among the poor people … he had felt happy by doing something for the people,” she said.

The prime minister said the Father of the Nation had no personal expectation in his life. “He wanted to ensure a developed and beautiful life for the country’s people. That’s why his sacrifice did not go in vain,” she said.

At the outset of her speech, Sheikh Hasina extended heartfelt greetings of Mujib Year on her own behalf as well as her sister Sheikh Rehana to all Bangladesh nationals at home and aboard along with the world community.

Beginning today, she said, the ‘Mujib Year’ will be observed till March 26 in 2021, and the golden jubilee of Bangladesh’s independence will be celebrated in 2021.

The premier said not only in Bangladesh, different friendly countries and international organisations like Unesco and OIC have also become partners of Mujib Year celebration. “I express gratitude and gratefulness to all of them,” she said.

Sheikh Hasina also expressed her gratitude to the Almighty Allah for giving the opportunity to celebrate Mujib Year.

“This is a big achievement in our life, which cannot be explained in language. I deeply express my gratefulness to the countrymen – those who gave us the scope to celebrate the Mujib Year by bestowing the responsibility upon my party – Bangladesh Awami League – to run the country for the third consecutive term,” she said.

Sheikh Hasina expressed her thanks to all, who gave their hard labours to make successful the celebration of the birth centenary of the Father of the Nation.

The prime minister mentioned some changes have been brought in the inaugural ceremony due to worldwide coronavirus outbreak. “But we’ll celebrate Mujib Year throughout the year through various programmes,” she said.

For the same reason, Sheikh Hasina said, visits of foreign guests have been postponed.

“I’m personally and on behalf of the people of Bangladesh extending thanks and gratitude to them,” she said.

In her speech, the premier also recalled with profound respect four national leaders and martyrs of the liberation war and also expressed deep sympathy to repressed mothers and sisters and war-wounded freedom fighters.-BSS