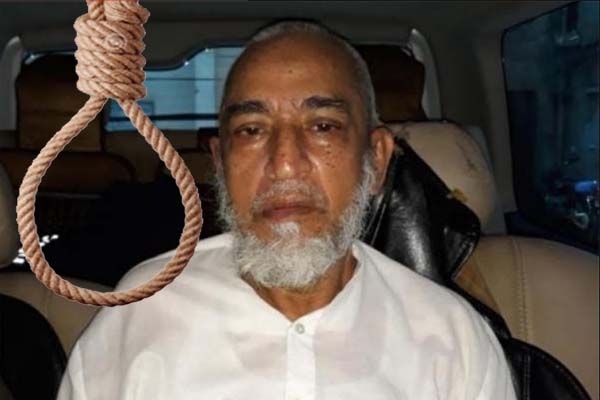 The 72-year-old Mazed was hanged after putting a special type of thick and smooth rope around his neck, jail sources said. A hangman carried out the hanging.

Later, the Dhaka district's civil surgeon confirmed his death by cutting the veins of his wrists and feet.

Majed's body was kept hanging for some time. Afterward, the body was brought down and the prison doctors examined it and confirmed his death. Later doctors conducted post-mortem.

Three ambulances, one of which was to carry the body, were kept ready as all preparations were completed to execute Majed, jail officials said.

The jail authorities took all necessary preparations to execute Majed shortly after the government's execution order reached the prison on Thursday.

Security in and around the Dhaka Central Jail was tightened with the deployment of huge contingent of law enforcement agency personnel in the area.

Earlier, Inspector General of Prisons Brigadier General AKM Mostofa Kamal Pasha told journalists  that all necessary preparations were taken to hang the condemned convict Abdul Majed. Adequate securitty measures were also been taken inside and outside the Dhaka Central Jail.

Law enforcing agencies said Majed was arrested from in front of Gabtali Bus Statnd at about 3:45 on Monday night. He was arrested after 44 years 7 months and 21 days into the killing of Bangabandhu and his family members.

Five family members of Majed including his wife met him in jail for the last time early Friday afternoon. Before hanging, every condemned convict is allowed to meet his or her family members.

Mazed was the sixth army officer who was executed for the murders of then president Bangabandhu Sheikh Mujibur Rahman and most of his family members at his No. 32 Dhanmondi residence in the early hours of August 15, 1975.

One of his two surviving daughters, Sheikh Hasina, is now the prime minister of the country.