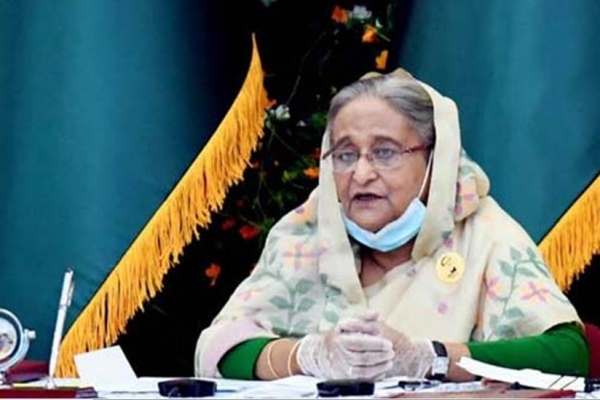 Prime Minister Sheikh Hasina today announced that the government will provide cash assistance before Eid to mitigate the sufferings of those rendered jobless amid the coronavirus outbreak.

“We want to give cash assistance ahead of the Eid to those who have lost jobs due to the nationwide shutdown over the coronavirus pandemic to minimise their plight … we’ll do it to ensure their food security,” she said.

The prime minister made the announcement while exchanging views with the public representatives and officials of eight districts of Rangpur division on the present coronavirus situation of the country through a videoconference from her official Ganabhaban residence.

The prime minister also declared suspension of realising bank interest for two months and also hinted at extending the ongoing government holidays till May 15 in view of the coronavirus outbreak.

Sheikh Hasina said the government has directed to open haats-bazzars (markets) and shops so the people do not face any problem to have iftar and sehri and they can buy goods as the Eid-ul-Fitr is ahead.

The prime minister said to keep the wheels of the economy running, the government has also instructed to reopen small and medium industries across the country by keeping the people protected and giving attention to their health.

“We’ve already reopened the offices and courts in a limited scale so that the people don’t suffer in getting services,” she said.

The premier said the government stopped the movement of buses, launches and trains alongside the flights considering the situation arising out of coronavirus outbreak.

“But we’ve resumed the operation of rail services in a limited scale for the convenience of the people and postal parcel service,” she said.

In this connection, Sheikh Hasina said these will have to be done by avoiding mass gathering as there is a chance of spreading the disease further for this.

“All will have to maintain social distancing and avoid mass gathering as there is a scope to be infected for violating these rules,” she said.

While talking about payment of bank loan interests, the prime minister said many people have already taken bank loans – ranging from big to small amounts.

“But realising their loan interest has been suspended for two months as they had no work and business in the last two months due to the pandemic,” she said.

“We’ll take the next steps considering the issues that who have taken what amount of loan and for which sector.”

The premier said the government has announced a set of stimulus packages of nearly Taka one lakh crore which is 3.5 percent of the country’s GDP to offset the economic fallouts of coronavirus outbreak on the country.

“We’ve declared these special packages so that the businesspeople could keep up their trade and business,” she said.

Sheikh Hasina said the government had earlier issued 50 lakh ration cards for the vulnerable people so that they can purchase rice at Taka 10 per kg.

“We’ll now give 50 lakh more ration cards so the poor and distressed people don’t suffer for want of food in this crisis period” she added.

The prime minister said that the government declared a Taka 5000 crore special stimulus package so that the small and medium farmers get benefits from it. “Besides, we’re giving subsidy of Taka 9,500 crore to farmers,” she said.

Sheikh Hasina said the leaders and workers of Awami League, Krishak League and Chhatra League have stood beside the framers to harvest their paddy.

“They’re also engaged in distributing relief among the distressed people and for this I extend my sincere thanks to them,” she said.

The prime minister thanked the health workers, including doctors and nurses, officials of the administration, the members of the armed forces and law enforcement agencies, saying that they have been working round the clock by risking their lives to contain the disease.

“We’ve allocated Taka 750 crore as an incentive package for them,” she said, adding that the government has announced Taka 100 crore stimulus package for those who are truly providing healthcare services from the frontline.

Mentioning that there is no shortage of medical equipment to protect all, she said the government is importing the equipment side by side producing those here.

“Besides, many people donate the equipment and we’re working in this way,” she said.

Pointing out that a number of media workers have already been infected by the disease, Sheikh Hasina requested them to perform their duties by protecting themselves.

The prime minister once again asked all concerned to make sure that no single inch of land across the country remains fallowed to effectively fight the possible famine due to the coronavirus pandemic.

“Different international organisations forecast that the world may experience famine and great economic depression due to the coronavirus pandemic. So, we’ve to make sure that a small piece of land remains uncultivated as the land of our country is very fertile, to combat the possible famine,” she said.

Sheikh Hasina instructed the agriculture minister to bring all the lands under cultivation immediately after harvesting of the Boro paddy as part of the efforts in bringing out the best possible outcome from the agriculture to meet the demand of Bangladesh and other countries.

Describing agriculture as the most precious asset for Bangladesh, the premier said the country could advance further by capitalizing on this asset.

Pointing out that there is an adequate stock of food grains in the country, Sheikh Hasina asked all concerned to make sure that no one remains hungry.

She said her government has set a target to procure 21 lakh metric tons (MT) of food grains including 10 lakh MT of rice, 8 lakh MT of paddy, 2,20 lakh MT of atap (sunned) rice and 80,000 MT of wheat in the current season.

“If we can procure the food grains, then, I hope, there will be no crisis (of food) in the coming months.” she said.

Turing to transportation of goods, the prime minister directed the railways minister, who was connected from Panchagar, to take effective measures for transportation of all types of goods and food grains particularly those perishable by trains.

Regarding seasonal monga (a famine-like situation) which was once a common phenomenon in Rangpur region, Sheikh Hasina asked all concerned to take special measures so that the monga does not come back again in the region.

“We hope monga won’t return in this region as our government is very much alert to this end,” she said.

The premier called upon all to maintain the social distancing and stay-at-home policies in accordance with directives of the World Health Organisation (WHO) as part of the precautionary measures to protect themselves from the COVID-19.

“I would like to request all again not to go outside home unnecessarily, avoid mass gatherings and follow the health directives as you don’t know through whom you can be infected since the disease is highly contagious,” she said.

In this connection, Sheikh Hasina urged all to wear masks alongside washing hands and taking warm water.

Relating to providing healthcare services to COVID-19 patients, Sheikh Hasina said her government has already dedicated many hospitals in districts and upazilas across the country.

“We’re also recruiting 2,000 physicians and 6,000 nurses to treat the persons infected with the virus,” she said.

The premier said the second unit of Dhaka Medical College and Hospital has been kept ready for treatment of the COVID-19 patients while the unit-1 will render services to normal patients.

Spelling out the government’s measures for the protection of physicians, nurses and health workers, the prime minister said that her government has been taking all possible measures including collection of sufficient PPE (personal protection equipment) to ensure their safety.

She appreciated introduction of mobile healthcare services by the Panchagar district administration to reach medicare services to every doorstep in the localities having no community clinic.

She assured that her government would take initiatives to build community clinics in the areas of the district where it requires.

The premier once again directed the local administration to deal with the COVID-19 situation in a pragmatic way to check further spread of the lethal virus.