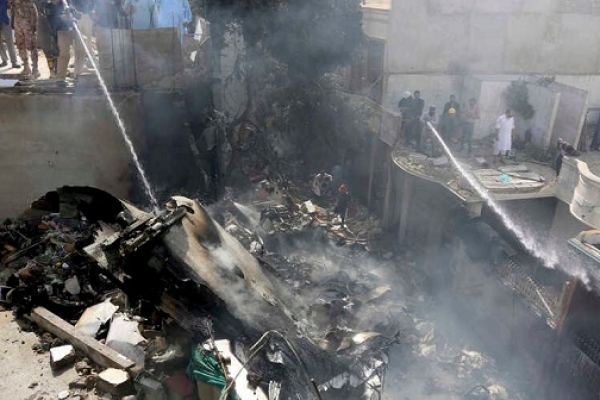 A passenger plane with at least 98 people on board crashed in a populated area minutes before landing Friday afternoon in Pakistan’s biggest city Karachi, destroying multiple buildings on both sides of a narrow street.  Unconfirmed reports say at least 107 people were killed.

Huge plumes of dust and smoke, heat from the crash on an already hot afternoon, and narrow neighborhood streets made rescue efforts difficult.

Multiple civilian and military rescue agencies arrived at the scene soon after the crash. Ambulances of non-government aid agencies could be seen evacuating the injured. Large crowds of locals also gathered around the site.

The plane from the national carrier Pakistan International Airlines was flying from Lahore to Karachi when it crashed in an area called Model Colony.

The cause of the crash is still being investigated.

"Saying anything right now would be premature. Our crew is trained to handle emergency landings. All my prayers are with the families. We will continue to provide information in a transparent manner," PIA spokesperson Abdul Sattar told local English language Dawnnewspaper.

The plane had a capacity of around 160 passengers but due to the social distancing guidelines linked to the novel coronavirus, the onboard numbers were kept low.