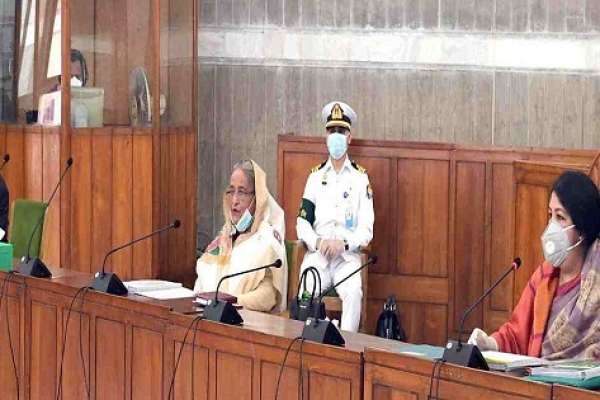 The cabinet today in principle approved the draft of “The Bangladesh Bank (Amendment) Act, 2020” by extending the highest age limit for the governor of the central bank from 65 years to 67 years.

The approval came at the regular cabinet meeting held at the cabinet room of the Jatiya Sangsad Bhaban with Prime Minister Sheikh Hasina in the chair.

“Following a discussion, the cabinet has decided that the age limit of the central bank governor could be extended to 67 years (from existing 65 years),” Cabinet Secretary Khandker Anwarul Islam told a press briefing at Bangladesh Secretariat.

He said according to the provision of clause (5) of the Article 10 of The Bangladesh Bank Order, 1972 (President’s Order No. 127 of 1972) the tenure of the central bank governor is four years and he or she could be given reappointment.

“But the ‘proviso’ of that clause mentioned that no person can hold the post of the governor after completion of 65 years of his or her age,” Islam said.

Islam said even it’s not possible to reappoint an experienced person who performed the responsibility of the governor at the Bangladesh Bank.

In this connection, he referred that the highest age limit of the governor of central bank of neighbouring countries of India and Sri Lanka has not been mentioned.

“In this circumstance, an initiative has been taken to scrap the proviso of clause (5) of the Article 10 of The Bangladesh Bank Order, 1972 (President’s Order No. 127 of 1972) related to the highest age limit of the central bank governor in the public interest,” the cabinet secretary said.

Islam said the cabinet also endorsed the draft of “The Use of Information Technology by Court Act 2020 (Adalat Kartik Tathya Projukti Bebohar Ain 2020) in bid to get a recent ordinance ratified by parliament for turning it into an act.

Amid the COVID-19 shutdown, the ordinance titled ‘Adalat Kartik Tathaya Projukti Bebohar Ordinance 2020’ has recently been promulgated allowing the courts to run trial proceedings through videoconferences and other digital means using the information technology.

Since it became difficult for the court to conduct the trial proceedings with presence of all concerned due to the COVID-19 pandemic in Bangladesh like other countries of the world, the President on May 9 promulgated the ordinance, said the cabinet secretary.

Though the government and private offices including the courts have recently been reopened, but the public gathering is discouraged to prevent COVID-19 pandemic, he said.

In this circumstance, it will have to get the ordinance ratified by parliament within 30 days after the first sitting of the upcoming 8th session of the 11th parliament following placement of a bill in the House in order to make the ordinance into an act.

“Otherwise, this ordinance will lose its effectiveness after 30 days,” he said.

Besides, the cabinet approved a proposal for the formation of a company titled Bangladesh-China Power Company (Pvt.) Limited (Renewable) under a joint venture of the state-owned North-West Power Generation Company Limited of Bangladesh (NWGCL) and the China National Machinery Import and Export Corporation (CMC).

It also approved the drafts of Joint Venture Agreement, Memorandum of Association and Article of Association for the formation of the proposed company.

Both the NWGCL and CMC will have 50-50 share of the proposed joint venture company.

The cabinet also approved a proposal for ‘National Statistics Day’ on February 27 every year.-BSS