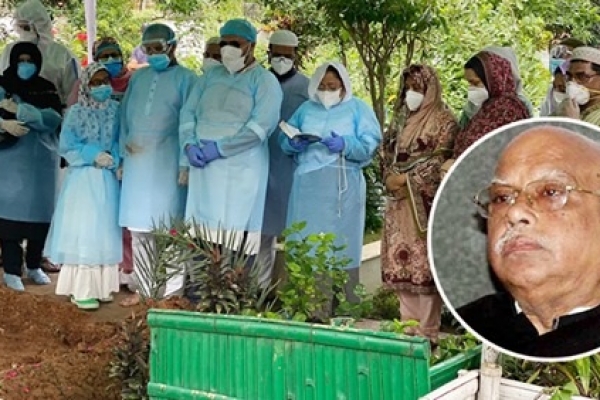 Awami League presidium member and former Health Minister Mohammad Nasim was laid to rest at his mother's grave at Banani Graveyard in the capital with state honour. He was given state guard of honour at 10:57am after second janaza.

Nasim's son Tanveer Shakil Joy and other family members were present there where his second namaz-e-janaza was held around 10:20am maintaining health guidelines. Hundreds of AL leaders and activists attended the janaza.

Earlier this morning, the first janaza for the veteran politician was held at Sobhanbag Jame Mosque in city's Dhanmondi area around 9:35am.

Awami League presidium member and Sirajganj-1 lawmaker Mohammad Nasim died on Saturday morning at Bangladesh Specialised Hospital in the capital at 11:10 am after fighting for life for eight consecutive days. He was 72.