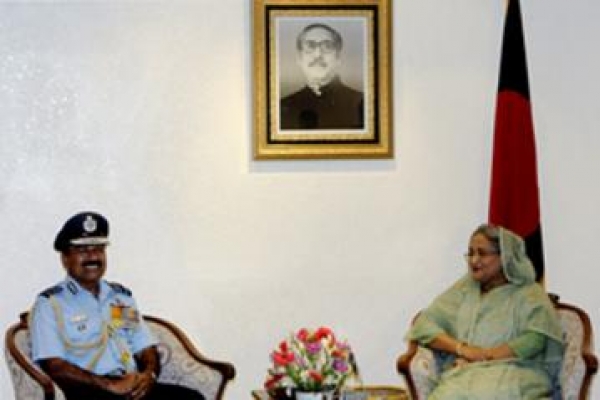 They discussed various issues relating to mutual interests and cooperation in various sectors including in the areas of economy, communication and air forces of the two countries.

She recalled the support and sacrifices made by the Indian allied force during the great War of Liberation of Bangladesh in 1971. She particularly mentioned the air battle in Dhaka at the fag end of the war, saying she along with other members of her family from their confinement witnessed the battle.

She said once the sub-regional cooperation like the BBIN initiatives and BCIM corridor become functioning, a new opportunity to generate more economic activities among the countries would be created.

The Prime Minister informed the Indian air chief of her government's initiatives for turning the Syedpur Airport into a regional airport, saying neighbouring countries can operate cargo flights from the airport.

Conveying her greetings to Indian Prime Minister Narendra Modi, Sheikh Hasina underscored the need for more unofficial visits alongside official visits of the leaders of the neighboring countries to strengthen mutual cooperation. She also put emphasis on increasing the number of border "haats" across Indo-Bangla border.

The Prime Minister also pointed out the steps taken for direct flight operation from Sylhet Osmani International Airport, saying London and Europe-bound citizens of Northern Indian states can use the airport for transit.

Terming his visit to Bangladesh as a significant one, the Indian Air Chief said the bilateral relations between the two countries have reached a new height.

He highly lauded the dynamic leadership of Prime Minister Sheikh Hasina, and said the military cooperation between the two countries has increased over the years. He said a lot of visits are taking place at the military training level. Bangladesh and India can work together on disaster management sector, he said.

The Indian Air Chief said they are very happy over the reception and honour shown to Indian war veterans by Bangladesh for their valiant role in 1971. Bangladeshi war veterans would also be honoured in India, he said.

The Indian Air Chief offered to contribute artifacts to the Liberation War Museum.