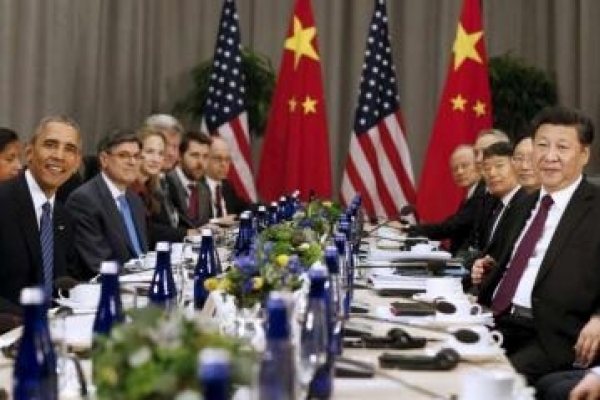 WASHINGTON: US President Barack Obama opened a meeting with his Chinese counterpart Xi Jinping with a promise of candid discussion over Beijing's alleged military buildup in the South China Sea.

"We will have candid exchanges about areas where we have differences,
issues like human rights, cyber and maritime issues," Obama said as he sat across the conference table from his Chinese counterpart.

US officials have expressed concern that China's actions in the South
China Sea are not consistent ...Details»

6 killed in UP poll violence

Six people, including a boy, have been killed and at least 60 others injured in violence centring on the second ...Details»

An overpass under construction in the bustling Indian city of Kolkata collapsed on to moving traffic below, killing at least ...Details»

Mirza Fakhrul Islam Alamgir has been made full functioning secretary general of Bangladesh Nationalist Party (BNP) after five years of his status as ...Details»

A Dhaka court has issued arrest warrant against BNP Chairperson Khaleda Zia and her 27 leaders in a case filed ...Details»

A man has been shot and injured in city's Mohakhali Wireless Gate area early Tuesday.

Injured--Tofazzal Hossain, 45, has been admitted ...Details»

Tonu 's body to be exhumed

A Comilla court has ordered the exhumation of Sohagi Jahan Tonu’s body for fresh autopsy, eight days after she was ...Details»

DHAKA: The cabinet today gave the final approval to the draft of "The Bangladesh Civil Aviation Authority Law, 2016", aimed ...Details»